GEORGETOWN, Texas (KXAN) — Building a home from the ground up has become increasingly difficult in Central Texas as many buyers face higher costs and longer build times.

In Georgetown, Robin Schwab spent a year waiting for her dream home.

“It took over a year to build my house,” Schwab said. “For a while, it was getting things like windows and appliances towards the end. Lumber was an issue from the get-go.”

Schwab was supposed to get the keys to her new home in June 2021, but that didn’t happen until nearly five months later.

“I think they bent over backwards. Their hands were tied and they were doing the best they could,” said Schwab. “It wasn’t their fault. I just never expected it to take a year to go from the ground up.”

“It’s all about ordering and getting your ducks in a row ahead of time,” said Jimmy Alley, co-owner of Register & Alley Custom Homes. “We’re ordering appliances as soon as we start the slab. There’s a 12-month wait sometimes.”

Alley primarily builds custom homes in the Westlake and Lago Vista part of the Texas Hill Country. He’s faced the woes of building in this period.

Pre-ordering ahead of time is how he’s kept track, but he does so with caution. Most service reps only allow builders to order so much. Alley says getting something as simple as an (LVL) Laminated Veneer Beam for 2-story homes can be a challenge.

“McCoy’s, which is our service rep, is only alloted so many LVL’s from the manufacturer per month,” said Alley.

These problems are also leading to higher costs for the buyer.

“We’ve actually had to change the way we bid homes,” said Alley. “We used to give them a solid number, but everything is a moving target. Everything pretty much has gone to costs-plus.”

Schwab says had she waited another year to build her home, she likely would have been priced out.

“I probably could not have afforded it. My house has gone up tremendously. The starting asking price for the same home, same floor plan is more than I could afford as a single teacher,” said Schwab.

In 2021, lumber prices spiked to more than $1,600 per thousand board feet. When COVID hit, mills slowed due to workers getting sick and new protocols. The industry also scaled back production, thinking it would slow like other sectors, but new home builds didn’t slow.

The demand for building and not enough supply led to a price spike. At this time last year, the National Association of Homebuilders found it cost over $36,000 more for a new single-family home.

Prices eventually dropped last year, but since November, lumber costs have started rising again, almost back to where it was a year ago.

Wed Apr 27 , 2022
ROCKLAND – An “unbuildable” lot on Concord Street could be getting four houses after the developer agreed to reduce their height.  The developer, Lou Petrozzi, said he would reduce the height of the houses by 3 feet to bring them more in line with the height of the two houses on either side of […] 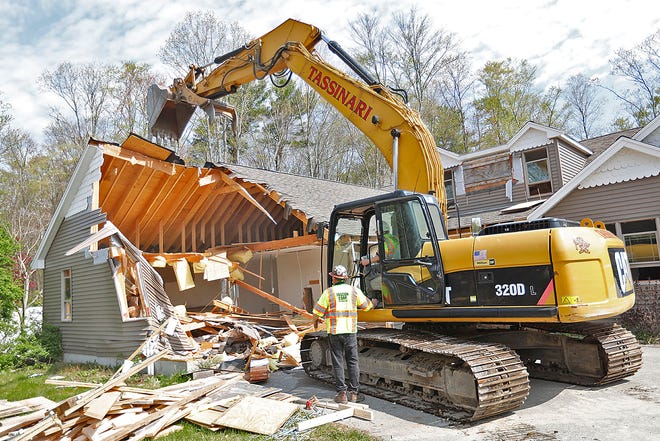